Historic Cities Of Eastern Canada With Ocean Train To Halifax 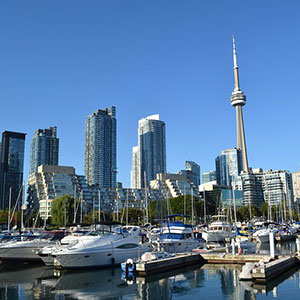 Vibrant cities, charming and historic small towns, stunning scenery, and special experiences await you on this Eastern Canada tour. Your tour starts in Toronto and ends with a 7-night Canada cruise with overnights also in Niagara Falls, Ottawa, Québec City, and Montréal. On your sightseeing tour in each city, you’ll see the must-see sights, such as the residences of the Governor General and the Prime Minister in Ottawa; Québec City’s Place Royale, the historic square known as the birthplace of French America; Montréal’s Notre Dame Basilica, dating to the 19th century, where Globus has included an inside visit; and Toronto’s 1,815-foot-tall CN Tower, where you’ll enjoy lunch with incredible views. You’ll also visit Basilica of Our Lady of the Rosary in Cap-de-la-Madeleine, a national shrine with its fine stained-glass windows. But that’s not all…this Eastern Canada tour also includes beautiful scenery. A tour highlight is a cruise to see the thundering falls of Niagara Falls. You’ll also take a cruise through the waterways of Ontario’s Thousand Islands National Park. Plus, more picturesque scenery awaits you on your 7-night cruise to some of Canada’s historic towns and beautiful places. Ports of call include Québec City; charming Charlottetown on Prince Edward Island; Sydney, originally settled by Highland Scots; Halifax; Bar Harbor, surrounded by Acadia National Park; and Boston.Globus has also arranged special experiences to make your vacation unique. Enjoy a wine tasting and tour at a local vineyard in Niagara-on-the-Lake and a special dinner in Old Town Québec featuring regional French cuisine. Additionally, Globus has arranged a guided tour and breakfast at a sugar shack in Québec City, where you’ll learn the art of making maple syrup.Continue your guided vacation on the Ocean Train from Montréal to Halifax, Nova Scotia. Settle in to your private sleeper car as you ride along the St. Lawrence River and views of New Brunswick. See the Citadel National Historic Site and the winding coastal highway to the Lighthouse Route to visit the tiny fishing village of Peggy’s Cove. A delightful ending to an Eastern Canada vacation of a lifetime.

The largest city in Canada’s Maritime Province, Halifax has strong ties to its past. The star-shaped Citadel fortress, built by Cornwallis in 1749, overlooks the city and much of the area’s maritime history is displayed in the Maritime Museum of the Atlantic.

Québec City is the capital of the province of Quebec, home to the famous Winter Carnival and is a delightful blend of historic old world charm combined with all of the conveniences of a modern city. On a bluff, overlooking the St. Lawrence River, the Hotel Chateau Frontenac, with its impressive spires and turrets, sits adjacent to the Plains of Abraham, where important battles between the French and the British were fought. Visit the Old Fort, or take a horse drawn carriage ride down the cobbled streets of Old Quebec City with it’s quaint shops, corner bistros, and art vendors in the market squares.

Prices are per person, land or cruise only, based on double occupancy. Offer subject to availability and change without notice. Some restrictions may apply. Please ask us for details.

Charges not included in the land vacation price: airfare to and from the start of your vacation; airline baggage fees including checked and/or excess baggage fees; Federal inspection fees for the Federal U.S. Customs and Immigrations; agricultural tax; other per person taxes imposed by government entities; applicable cruise taxes, fees, fares and port charges; passports; visas and vaccinations; transfers; tips to your Tour or Cruise Director, Local Host, driver, Local Guides, and/or ships’ crew; gratuities on ferries, trains, and cruise ships; laundry; telephone; minibar; alcohol, beverages, and food outside of the contracted menu as presented at a hotel or restaurant (these extra items will be billed to you before leaving the hotel, ship, or restaurant); additional excursions and activities not listed as ‘included’ in the itinerary; porterage at airports or train stations; Travel Protection premiums; and all other items of a personal nature.

Click on the buttons below to request a quote on this deal or contact us directly with further questions or comments.

Request A Quote Send To A Friend Have A Question? Contact Us

Send To A Friend

Please don't close or refresh the page while we are processing your submission
Please be patient, this could take a few minutes.